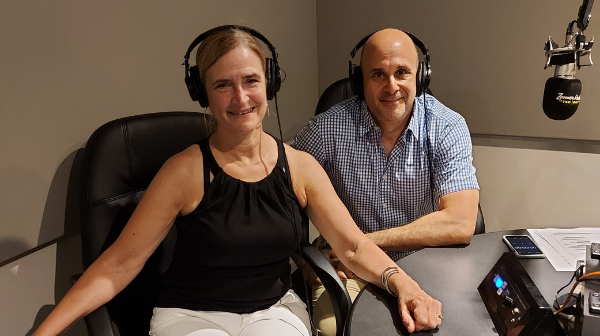 I had the pleasure of being interviewed once again by Jamie Bussin, the host of the health and wellness show, The Tonic on Zoomer Radio.

This is the final interview in a series of 3 that have been aired over the past few months. In this interview we discuss why many people who are over 40 years of age find that they cannot seem to lose weight when they follow the weight loss protocol of reducing calories by eating less and increasing caloric burn by exercise.  In fact there is a reason why this method does not work  for many people and we also discuss another method that can work instead that is healthy, natural and effective.

Where did this model of calorie in/calorie out for weight loss come from and why is it the “cardinal” approach most commonly recommended? If we look at the history of it, there was research being done back in the 30s about obesity and why people put on weight and what they need to do to lose it.

In North America the theory being researched the most was the idea that obesity was due to external factors, namely eating too much and not exercising enough so the result is that the person is taking in more calories than they burn during the day so the excess gets stored as fat. Therefore based upon this theory being the cause of obesity, the solution is obviously to flip the equation and make sure the person is burning more calories than they are consuming and the result is that they will make up the difference by burning fat.  So in other words, change the external influences of diet and exercise.  Oh if it was only that simple……  You may be shaking your head and thinking, been there, done that and guess what barely lost any weight. In fact this theory is not wrong and in many cases it will work but obesity is much more complicated than that simplistic view which is why for many other people this simplistic theory won’t work for them.

Back to history….. Again in the 30s research was also being done in Europe on obesity and the working theory they were researching was based on the idea that there is an internal disruption to the balance in the metabolism due to hormonal changes and possibly changes in the area of the brain responsible for metabolism, the hypothalamus.  Basically this theory was looking at internal changes that affected how the body handled food, specifically sugar in the blood  and managed fat. They were able to see that by changing hormones a person’s body would preferentially increase body fat as well as avoid releasing fat from fat cells when they reduced calories. They also saw that  person’s behaviour around food changed with an increase in appetite.

Unfortunately much of this research focused on an internal disruption causing weight gain being done in Europe, stalled due to World War 2 which obviously devastated much of Europe. As a result of this  the North American Calorie in /Calorie out model took hold and the majority of research since that time was built around this fundamental model.

Fortunately there has been a resurgence of research being done again looking at the idea that there is an  internal hormonal imbalance contributing to the  reason why some people tend to accumulate fat and their body fights them losing it.

Just ask many women over the age of 40 about how their body has changed and they find their bellies are getting larger, despite living on chicken, salads and broccoli and exercising like crazy.  I know that happened to me at age 50 and despite my best efforts nothing was working but luckily I knew enough to know that with what I was doing based upon the calorie/in/out theory I should have been losing weight so that meant something was not right “internally” with my body.  Something had changed.

As discussed in the interview I outline what can cause this internal disruption resulting in a stubborn belly that is just not responding to one’s best efforts.

What is this internal disruption?  The main imbalance is that the body has increases in the hormone insulin and the receptors in the cells for insulin are a bit sluggish to respond.  The end result is that the body is prone to higher blood sugar levels (despite eating a healthy diet) which increases insulin.  Insulin is the hormone of storage so it converts excess blood sugar into fat and these excess fat cells sit in the abdominal area.  Insulin also causes fat cells to hang onto the fat and blocks them from responding appropriately when a person does create a caloric deficit which under normal circumstances would result in some fat being burned and weight being lost.

What can contributes to this internal disruption:

As Jamie asked – okay but what can somebody do about this if they suspect this is why they are struggling with weight loss?

The good news is that it is possible to override this imbalance and get your body to burn that stored fat.  Once again it is all about managing insulin.  The body has 2 types of fuel it can use as its source of calories for the body, one comes from glucose which is reliant on insulin working properly and the other is using fat for fuel which bypasses the body’s need for healthy insulin response.

Getting your body to use your own fat for fuel is the 2nd model for weight loss as opposed to the calorie in /out model. When your body burns your own body fat it is using ketones for it’s source of fuel which means insulin levels stay low and once insulin levels are low for a long enough period of time fat cells will finally be able to release the stored fat and that is used to fuel your body.

This will override most of the issues that I stated earlier in the interview regarding what causes the internal disruption when the body does not respond to normal calorie in/out method for weight loss.

There are different ways to get the body to use fat for fuel and in the interview I discuss a few of the methods, my preferred choice being intermittent fasting because of the numerous other health benefits but especially because it is  a very simple strategy that most people can integrate into their lifestyle on a consistent basis. It can also be used as a very effective strategy for small corrections that sometimes need to happen as a long term tool to help with maintaining the weight that has been lost.

Using intermittent fasting led to my personal breakthrough for weight loss and since that time 8 years ago, this is the method I use for all my clients who have found the traditional approach for weight loss is just not working for them.

I will be doing more interviews on The Tonic so stay tuned to find out when I will be on next!!!